Many similarities exist between wrestling and surfing: strength, endurance, balance, flexibility, individuality, and self determination. Established in 1998, this "Ironman" Hall-of-Fame recognizes those athletes who have excelled through either competition, coaching, manufacturing or other contributions to both sports. Those nominated must have made a significant contribution or achieved a high level of excellence in at least one sport.

This Hall-of-Fame not only recognizes several outstanding dual sport contributors, but is also intended to raise community awareness of just how close surfing and wrestling really are. 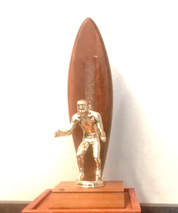 Now that female wrestling is on the rise, we expect to have a nomination from this gender in the near future. Nominations to this list can be made at any time.

Send email with nominations, comments or questions. Nominations will be acted on by all available members of the current list solely on merits.

"Both sports require so much individual commitment. They require one to expose all their soul to all who watch. Wins and defeat are experinced alone in the public eye. Both require a certain pain tolerance and will to not give-up, whether looking at the lights while fighting off your back or paddling back out against a huge set. Keep up the good work." -- Jim Zimny